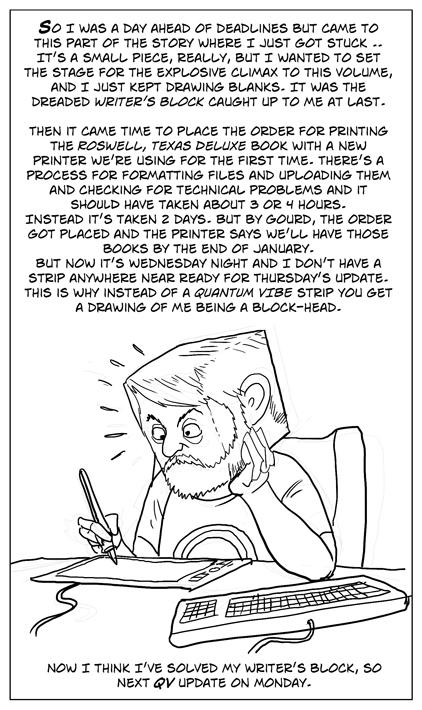 A thousand years in the future, humanity has colonized worlds in nearly 100 galaxies, thanks to Quantum Vibremonic technologies developed five centuries earlier. Other new technologies have created various off-shoots of humanity and extended life expectancies five-fold. The story begins with how a mad scientist and his plucky assistant, along with their robot friend, brought humanity to the stars, and continues with the adventures of some unique people in fantastic places.

Hope everyone had a great holiday. We've got plenty of exciting story ahead for 2022. So, don't miss a moment, because things are heating up.

For those who contributed to our Roswell, Texas Rides Again Indiegogo campaign, we are putting the finishing touches on the book, and hope to get it to press soon.

Happy New Year from the folks at Big Head Press!

So I was a day ahead of deadlines but came to this part of the story where I just got stuck ..
It’s a small piece, really, but I wanted to set the stage for the explosive climax to this volume, and I just kept drawing blanks. It was the dreaded writer’s block caught up to me at last.

Then it came time to place the order for printing the Roswell, Texas Deluxe book with a new printer we’re using for the first time. There’s a process for formatting files and uploading them and checking for technical problems and it SHOULD have taken about 3 or 4 hours.
Instead it’s taken 2 days. But by Gourd, the order got placed and the printer says we’ll have those books by the end of January.But now it’s Wednesday night and I don’t have a strip anywhere near ready for Thursday’s update.
This is why instead of a QUANTUM VIBE strip you get a drawing of me being a block-head.

Now I think I’ve solved my writer’s block, so
Next QV update on Monday.

For news and reviews:
The Beat
Bleeding Cool
Comics Worth Reading